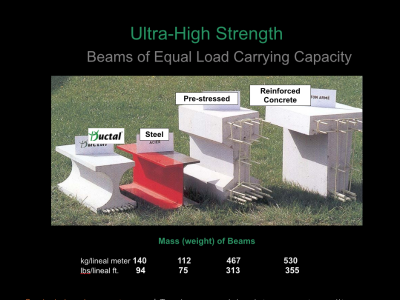 Years of research and development have honed Ductal®’s key characteristics to ensure exceptional mechanical performances that can withstand significant design challenges. From its resistance to compression to its creep and shrinkage behavior, and fire-resistance, Ductal® allows you to create slender structures with thinner form factors, requiring little or no passive reinforcement for most applications.
More than anything, Ductal® is known for its durability – its resistance to ageing and aggressive environments. Its denser matrix, free of defects at the macro and micro level, allows Ductal® to resist environmental wear longer than other concretes. With its extremely low permeability, water and abrasive elements are unable to penetrate the concrete matrix. This also offers excellent defense against the harmful effects of the freeze/thaw cycle and exposure to seawater, sulfates, weak acids and carbonation. In roofing solutions, waterproofing is essential and Ductal® offers the assurance of a water-tight mix.

Ductal® exhibits excellent performance in compression: It is 4 to 8 times higher than conventional concretes. Compression behaviour is almost linear elastic up to the maximum stress and exhibits no damage to the material during this phase.

A steel ball (1.5 kg) is allowed to freefall 3,000 times, and then the volume of resulting depression is measured. Results show that Ductal possesses about five times the strength of ordinary concrete.

Independent testing by Taiheiyo Cement has been conducted with rapid steel ball testing: 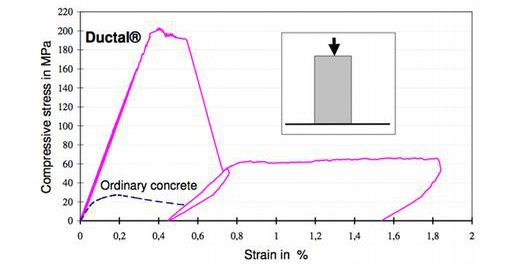 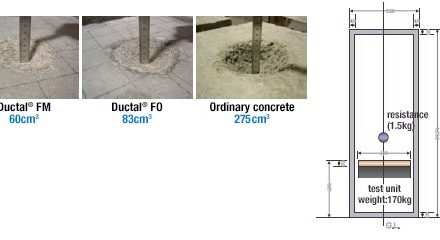 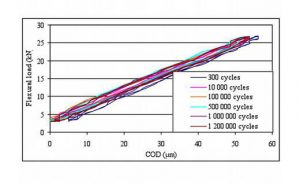 Fatigue tests on pre-loaded test samples were carried out at the CSTB. The loading applied was between 10 and 90% of the elastic limit. The figure below shows a crack opening displacement curve in relation to the number of cycles. Note: There is no increase in the crack opening, i.e. no crack propagation, at 1.2 million cycles.

Analysis of the rate of increase of the deflection in relation to the number of cycles shows that the loading applied is below the material’s threshold of endurance. When calculating the design of structures subjected to fatigue action-effects, the service stress is limited to the material’s resistance to direct tension. The results presented above verify that the application of the UHPC rule is particularly reliable in the case of Ductal® products with metallic fibers. 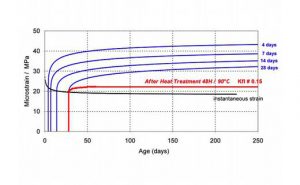 Creep tests have been carried out in France at the Ecole Centrale de Nantes and at the Laboratoire Central des Ponts et Chaussées (LCPC) and in the United States at the Federal Highway Administration (FHWA) Research Center in McLean, Virginia, USA.

For ordinary concrete, the creep coefficient can reach 3-4; for high-performance concrete, this is reduced but the recorded deformation remains higher than the elastic deformation. The creep coefficient of Ductal® is less than 0.8, and if a heat treatment is applied, the creep factor is less than 0.2, as shown in the figure below. As a rule, a value of 0.3 is considered for calculations.

Since the water to cement ratio is very low, Ductal® does not exhibit drying shrinkage. An endogenous shrinkage is observed (300 to 400 µm/m), but when heat treatment is applied, shrinkage is complete by the end of the treatment and there is no subsequent residual shrinkage, as shown in the figure above.

The fibers give the material a ductile behaviour during bending (i.e., when loaded in flexure beyond the elastic limit, micro-cracks occur and the fibers hold the cracks tightly closed, providing a ductile performance rather than a sudden or brittle failure) as shown in the following graph.

The ductility behaviour observed during bending is characterised by a multiple cracks before the stress peaks, without localization and without the presence of any major cracks. 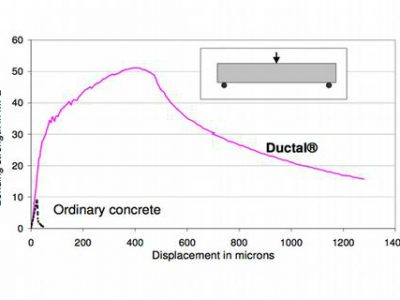 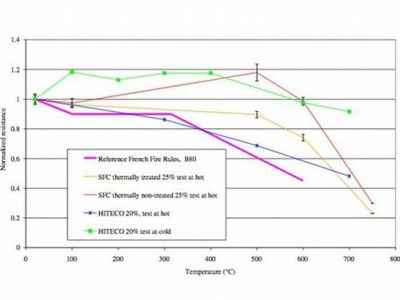 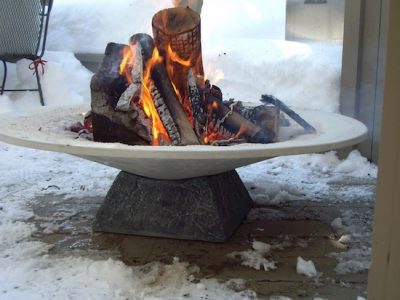 Ductal®-AF was specially formulated for fire resistance. Its composition uses metal and organic fibers. The high silica fume content, and negligible calcium hydroxide make it resistant to heat related spalling. ISO 834 fire resistance tests using loaded and unloaded posts and beams were conducted at the Centre Scientifique et Technique du Bâtiment (CSTB, in Marne-la-Vallée, France) and at VTT in Finland. These tests demonstrated the excellent fire performance of the material and an almost complete lack of flaking.