Szolyd has been asked by Atlantis Rausch to replicate uhpc components from original terra cotta tiles of the Trapp Block building in New Westminster.

This month, after decades of neglect The Trapp Block (circa 1913) and Holbrook (circa 1880s) will begin the transformation to their original state with the meticulous heritage façade restoration process. The process of reinstating the Trapp Block façade will take approximately five months and will change the face of Columbia Street, whilst significantly adding to the character of New Westminster’s historic commercial core.

When the first residents move into the new Trapp + Holbrook condos sometime next year, they’ll be stepping into a time warp that will take them back more than 100 years.

That’s because of the painstaking restoration work that is going on on one level of the new structure’s underground parkade to bring the terracotta facade of the historic Trapp building back to its original glory. Four tradesmen from Atlantis Rausch are uncrating almost 1,500 pieces of terracotta that were dismantled from the original building and packed away into storage so the gleaming new residential tower could rise above Columbia Street.

Using mallets, chisels and brushes, each piece is cleaned of its old mortar and debris that built up over the years. Stainless steel mesh is installed on the back of each piece to strengthen it and then the bricks that comprise the core are repointed.

Blocks that need to be repaired are patched and will be reglazed to as close to their original colour as possible. Those pieces that are damaged beyond repair are recreated with new moulds.

Fortunately those are few and far between, said Steven Rausch, who’s supervising the restoration.

The process of restoring the Trapp’s facade actually began as the former department store was being demolished.

As wreckers swung their mallets and wielded their crowbars in the back, Rausch’s team dismantled the terracotta facade piece-by-piece. Some of them weighed up to 1,000 pounds.

They photographed each block, catalogued it by number and graded it according to its condition. A blueprint shows where each numbered piece belongs.

The restoration work is expected to take months. As each piece is finished it’s placed in its proper position on a series of tables that wind through the partially-finished parkade.

The reinstallation of the terracotta is expected to begin in September.

It’s time consuming and costly work. But worth it said Robert Fung, president of The Salient Group that acquired the Trapp and Holbrook buildings in 2009 after previous developers were scared off at their attempts to rehabilitate and redevelop them because of the huge investment required to bring them up to modern standards.

“There is no other project in North America that is like this building,” said Fung, whose company has tackled similar projects on historical buildings in Vancouver’s Gastown area. “It adds a lot of value to somebody’s home.”

Rausch said his crew works hard to honour the skill and artistry of the terracotta’s original crafters.

“You have pride in the old world craftsmanship,” he said. “If you don’t do this, then it dies.” 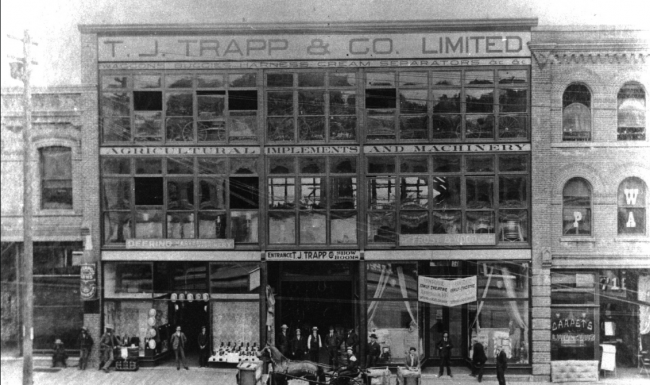 Early on in the development of the project it was determined that the interior construction of both the Trapp Block and Holbrook Block could not be saved due to irreparable structural failure. However much of the heritage value of the site is invested in the ornate facades of both buildings which are being restored.

Prior to demolition, a steel bracing structure was installed to retain the façade in place through the construction process. At the beginning of June, once the new structural steel and concrete of the tower were attached to the Holbrook façade, the Holbrook steel bracing facing onto Columbia Street was removed.

Throughout June & July the brick on the interior of the Holbrook façade will be cleaned and repaired. The brick will be thoroughly washed, the old grout removed and the brick repointed to strengthen the wall for seismic reinforcing.

Atlantis Rausch has been given the task of restoring and installing the seven storey Trapp Block terracotta façade. The Trapp Block façade was dismantled in 2012 and the terracotta blocks were carefully conserved in a temperature controlled workshop constructed on-site. These blocks will then be re-installed against a new stable wall structure from June through to August.

Both the Holbrook and Trapp Block façades have four different types of heritage windows that are either being replicated and replaced, or refurbished, by Vintage Woodworks in Victoria.

The terra cotta components to be replaced arrived at Szolyd headquarters yesterday. Steve from Atlantis Rausch is on his way to go over the build/ installation methodology of the new uhpc components.

terra cotta blocks on truck to Szolyd for replication 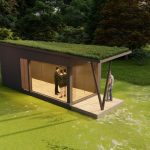